Children of Today, Champions for Tomorrow

Go to the home page of Brentfield Primary School

Year 3 have been learning about Mae C Jemison, a famous African American astronaut. She was the first black woman to go to space. To deepen their learning they visited the Planetarium to watch a 3D show called ‘Meet the Neighbours.’

As part of the visit, the children were able to explore the grounds and see the meridian line which represents the Prime Meridian of the world, Longitude Zero (0° 0′ 0″). Every place on the Earth is measured in terms of its angle east or west from this line. Since 1884, the Prime Meridian has served as the reference point for Greenwich Mean Time (GMT) and this line runs across the courtyard of the Royal Observatory where the Planetarium is based. 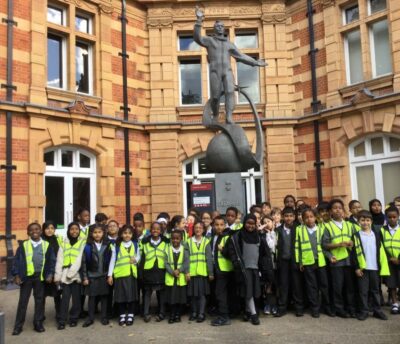 During their visit to the Planetarium, they watched a 3D show called Meet the Neighbours which took them on an exhilarating journey through the Solar System. They were very keen to ask questions and find out more about the planets and learn how Mae C Jemison would have felt when she went into space!

After the show, the sun was shining so the children were luck enough to be able to have a picnic in the park before they started their journey back to school.

This is what some of the year 3 children thought about the day:

Ayman: I thought my day was very good because in the Planetarium, it looked very realistic. It was 3 dimensional! I learnt that you can use the stars to find north so if you ever get lost, just look and the sky and you will be able to find your way!

Laila: I really liked seeing the stars. The show was very interesting. I learnt that the planets have moons. I think Mae C Jemison would have been amazed when she first went into space. She may have seen a Black Hole!

Matthias: I saw something amazing! I looked up into the sky and saw the planets and the Solar System. I saw stars, moons and asteroids. My favourite part was laying back and looking at the Solar System.

This website uses cookies to improve your experience while you navigate through the website. Out of these, the cookies that are categorized as necessary are stored on your browser as they are essential for the working of basic functionalities of the website. We also use third-party cookies that help us analyze and understand how you use this website. These cookies will be stored in your browser only with your consent. You also have the option to opt-out of these cookies. But opting out of some of these cookies may affect your browsing experience.
Necessary Always Enabled
Necessary cookies are absolutely essential for the website to function properly. These cookies ensure basic functionalities and security features of the website, anonymously.
Functional
Functional cookies help to perform certain functionalities like sharing the content of the website on social media platforms, collect feedbacks, and other third-party features.
Performance
Performance cookies are used to understand and analyze the key performance indexes of the website which helps in delivering a better user experience for the visitors.
Analytics
Analytical cookies are used to understand how visitors interact with the website. These cookies help provide information on metrics the number of visitors, bounce rate, traffic source, etc.
Advertisement
Advertisement cookies are used to provide visitors with relevant ads and marketing campaigns. These cookies track visitors across websites and collect information to provide customized ads.
Others
Other uncategorized cookies are those that are being analyzed and have not been classified into a category as yet.
SAVE & ACCEPT
Powered by